Skip to Article Skip to Search About Us Skip to simple menu
DrThomasKleinmanOnline.com

Chiropractic Care and X-Rays for Low Back Pain

Published on 29 October 2014 under Back Pain 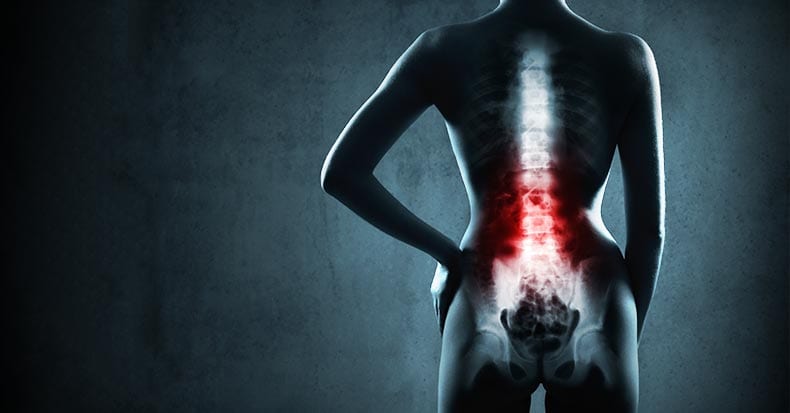 Low back pain (LBP) is the most common complaint for which patients seek chiropractic care. X-rays are a common diagnostic tool utilized by most healthcare providers. Let’s take a look at the role of x-rays and how they are used by both medical practitioners and chiropractors.

X-rays are a form of radiation (similar to light or radio waves) that focuses a beam on a subject such as a person or specific body part. The x-rays mostly pass through softer tissues while hard tissues like teeth and bones do not allow the beam to pass through, which leaves a “white” image on the film. More dense soft tissues, like muscles and organs, will appear as various shades of gray while less dense areas, like the lungs or bowel, will appear black on an x-ray.

Spinal x-rays are basically pictures of the spine that are taken to help the doctor determine a diagnosis as to the cause of the patient’s particular problem. Typically, a patient provides a medical history and the doctor performs a clinical examination to establish a primary diagnosis. When necessary, the doctor may order diagnostic tests like x-ray (or a CT, MRI, bone scan, PET scan, ultrasound, blood tests, tissue biopsy, and so on) in attempt to verify or validate the diagnosis. Spinal x-rays include the bony spine, the disk spaces (between each vertebra – but not the actual disk), and often the pelvis (with or without the hip joints), and extend up to the lower thoracic spine where the lower few ribs are located, depending on the patient’s height. Usually, frontal and side views are taken. Other views may include a “spot” (close up), obliques, or flexion/extension stress views. So, what is your doctor looking for?

The FIRST order of business is to make sure they’re not dealing with something potentially dangerous like fractures, infections, dislocations, tumors/cancer, and so forth. They look for other things like bone spurs (“osteoarthritis”), the disk heights (disks narrow as they degenerate, usually accompanied with bone spurs), joint spaces, bone density, and alignment – like scoliosis. Chiropractors typically take spinal x-rays in a weight-bearing position (standing) while most medical facilities take their x-rays with the patient lying down. The “pro” of a weight bearing x-ray is the ability to measure for things like scoliosis, leg length deficiency (a short leg), and joint space narrowing favoring the standing approach. The “con” of weight-bearing x-ray is something called “movement artifact” or a blurred image. Recumbent films tend to be clearer and more detailed but with less of an ability to accurately take measurements to evaluate things like leg length or the extent of spinal misalignment. Both MD’s and DC’s take scoliosis films standing, but otherwise, MD’s favor laying down x-rays while DC’s favor standing. Regarding the “safety vs. harm” factor of taking an x-ray or not, most guidelines favor waiting if there is no suspicion of pathology (cancer, fracture, infection, etc.) for both professions. However, when a significant biomechanical problem is suspected, especially if a treatment decision is driven by the test’s outcome, it may be appropriate to take x-rays. For example, the use of heel lifts to correct a short leg is also measured on the x-ray. There are also some chiropractic techniques that rely on assessing the bony alignment, which include taking measurements from an x-ray. Patient safety is first and each case must be individually assessed. If you think you may be pregnant, DO NOT LET ANYONE X-RAY YOU!

Thousands of Doctors of Chiropractic across the United States and Canada have taken "The ChiroTrust Pledge":“To the best of my ability, I agree to
provide my patients convenient, affordable,
and mainstream Chiropractic care.
I will not use unnecessary long-term
treatment plans and/or therapies.”